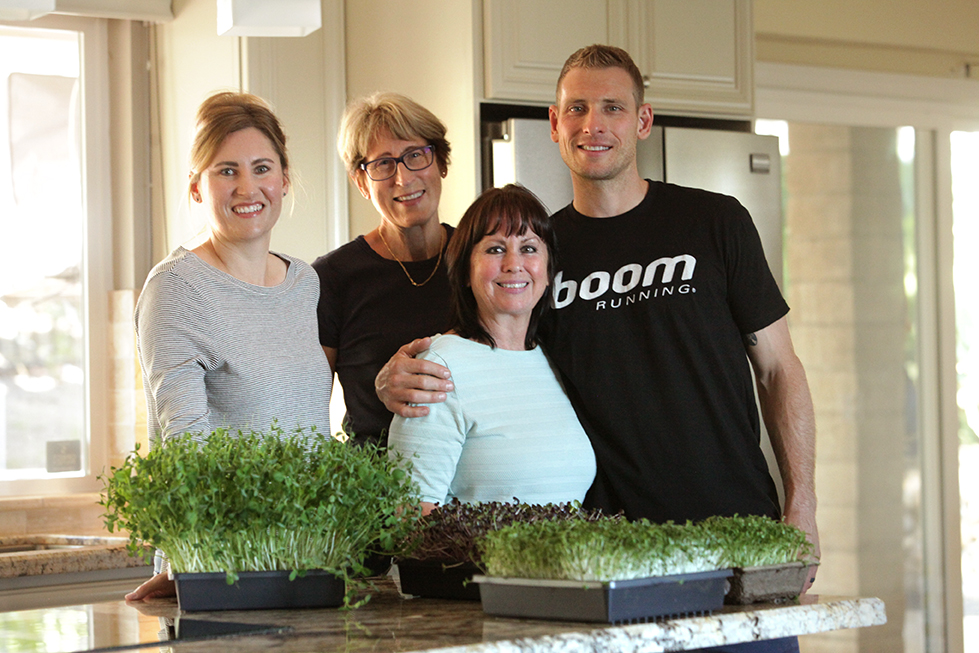 Scheduling an interview with Brian Ciuchta (pronounced “shoo-ta”) of High Ranch Farm is tricky. At first, the 34 year old San Diego native was in Idaho running a 103 mile race. (That’s the equivalent of about four marathons for those counting at home.)

When our schedules later match up for a phone call, it turns out Brian has just finished a three day shift at Rancho Santa Fe Fire Protection District where he works as an engineer and paramedic. “Another one of our guys needed someone to pick up his shift, so I worked extra,” he says nonchalantly. 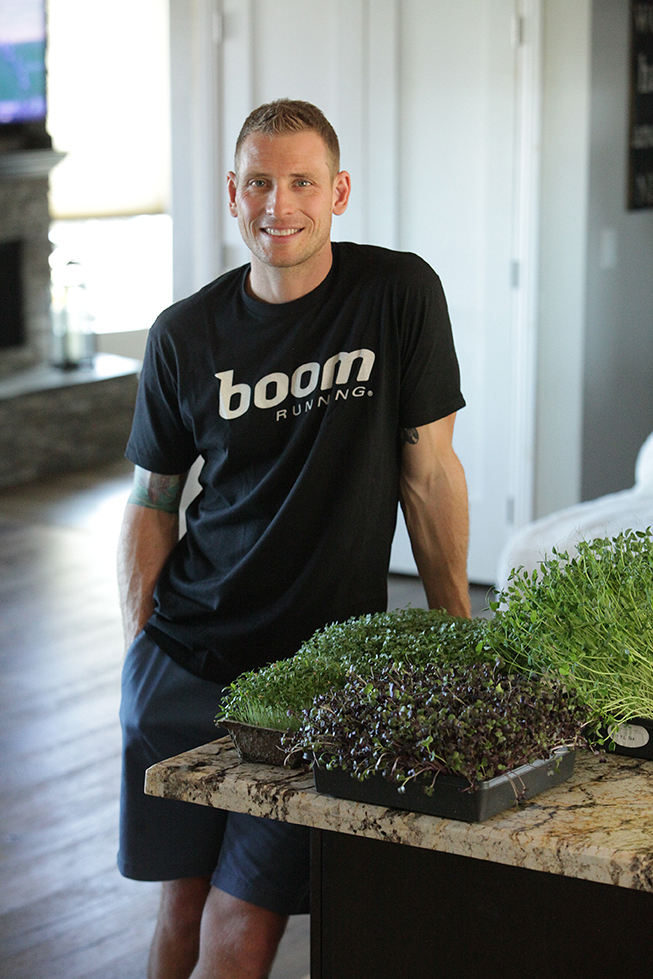 When he’s not running hundreds of miles or saving lives during multi-day work shifts, Brian is building his side business, High Ranch Farm.

High Ranch Farm isn’t a typical farm, mind you. There aren’t hundreds of acres with rows of giant veggies, tractors, and livestock running about. No migrant workers sweating under the sunny San Diego skies, either.

Instead, the gorgeous and incredibly nutritious veggies from his farm almost require a magnifying glass to fully appreciate. They’re “microgreens,” which USDA researchers recently found pack up to five times more vitamins per gram than the mature plants do. 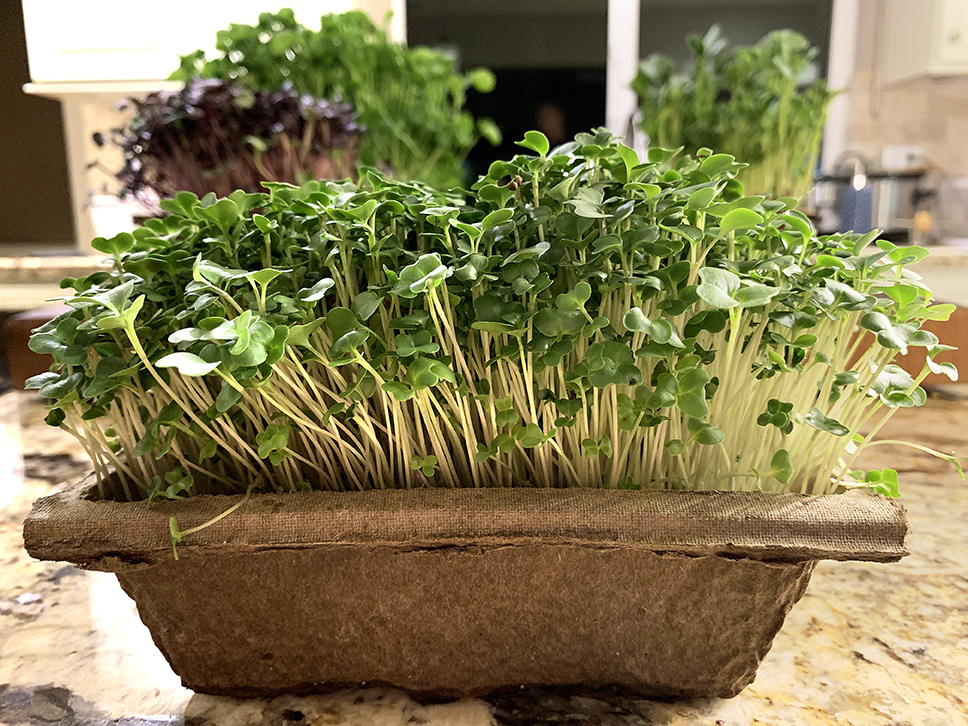 Microgreens from High Ranch Farm are so beautiful, you almost feel bad for eating them. Almost.

The workers? Brian’s wife, Shannon, was the first to begin helping out to make sure the microgreens were tended while Brian was on long work shifts at the fire department. 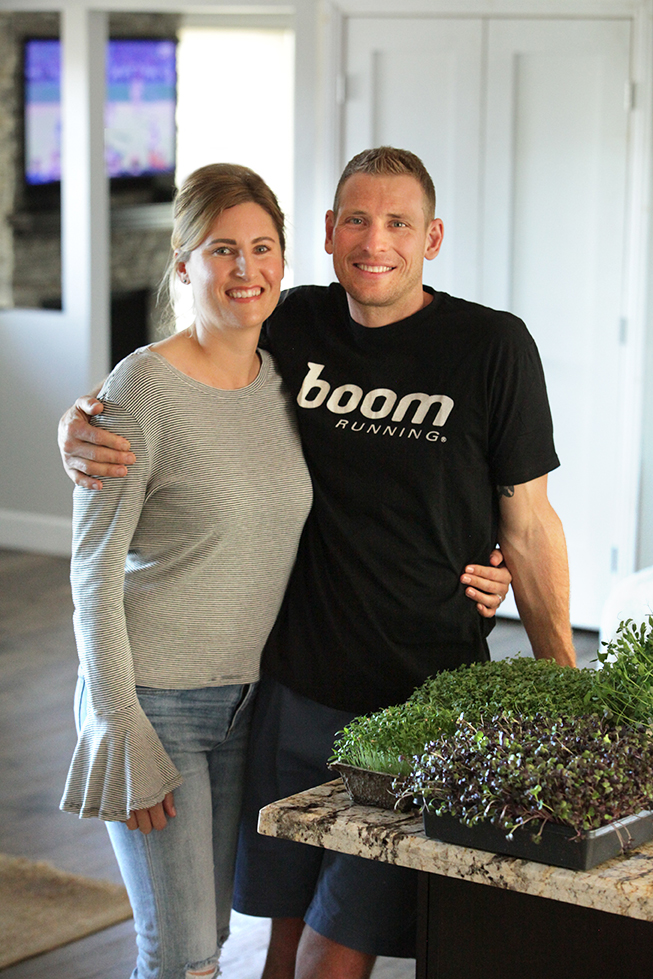 As the business has grown, his parents have also stepped in to help out. (They’re retired Cajon Valley School District employees.)

And when the farm needed a logo and graphic art they turned to Rita Hoffman, Brian’s mother-in-law (a retired graphic designer). High Ranch Farm is truly a family business! 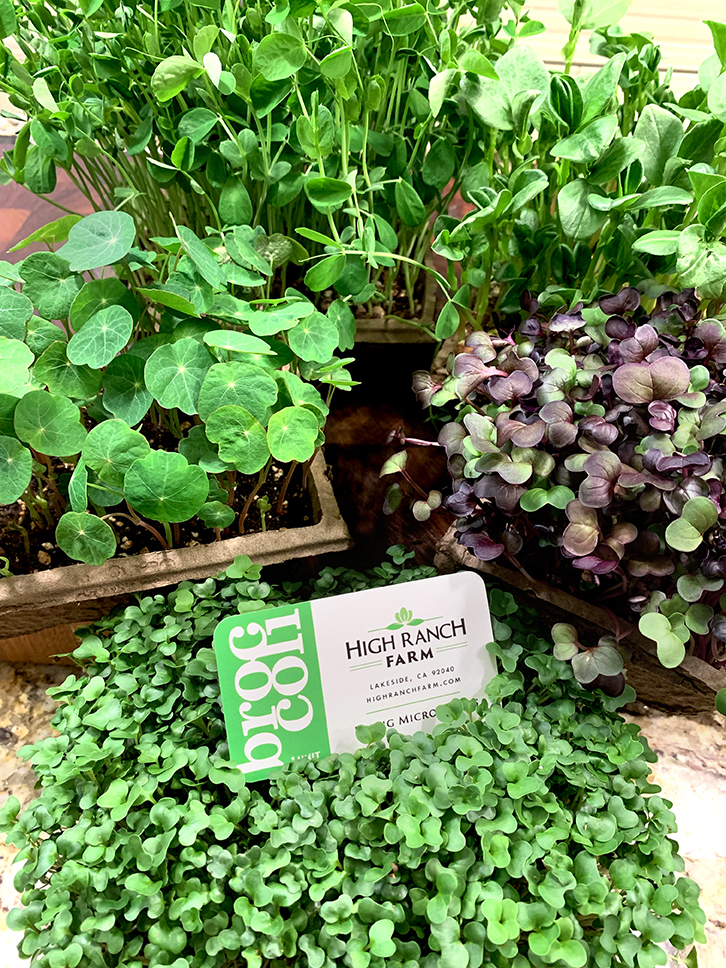 The origins of High Ranch Farm

Like many businesses, High Ranch Farm was born due to a need experienced by the business’s founder. Brian and his wife are vegetarians, or “90% vegans” as he describes it. They love eating fresh, local, organic food so decided they’d grow some of their own food at home.

They started growing lettuce (salads are a favorite meal item), and Brian soon realized “we couldn’t grow enough lettuce for ourselves” given the time it takes lettuce to reach maturity and the amount of space required to grow full heads of lettuce.

Brian started looking for something that would “turn over more quickly” and provide them with enough greens for their salads. That’s when he started growing microgreens.

If you’ve never heard of them before, the USDA describes microgreens as:

“…. edible greens which germinate from the seeds of vegetables and herbs and are harvested without roots at the seedling stage. The plants at the seedling stage have two fully expanded cotyledons, or seed leaves. They are considered a specialty genre of colorful greens that are good for garnishing salads, soups, plates and sandwiches.”

You’ve likely seen microgreens used as a colorful and flavorful garnish at fancy restaurants. However, Brian and his wife eat entire salads made of microgreens, and think other people should start using them similarly given their incredible flavor and off-the-charts nutrition. 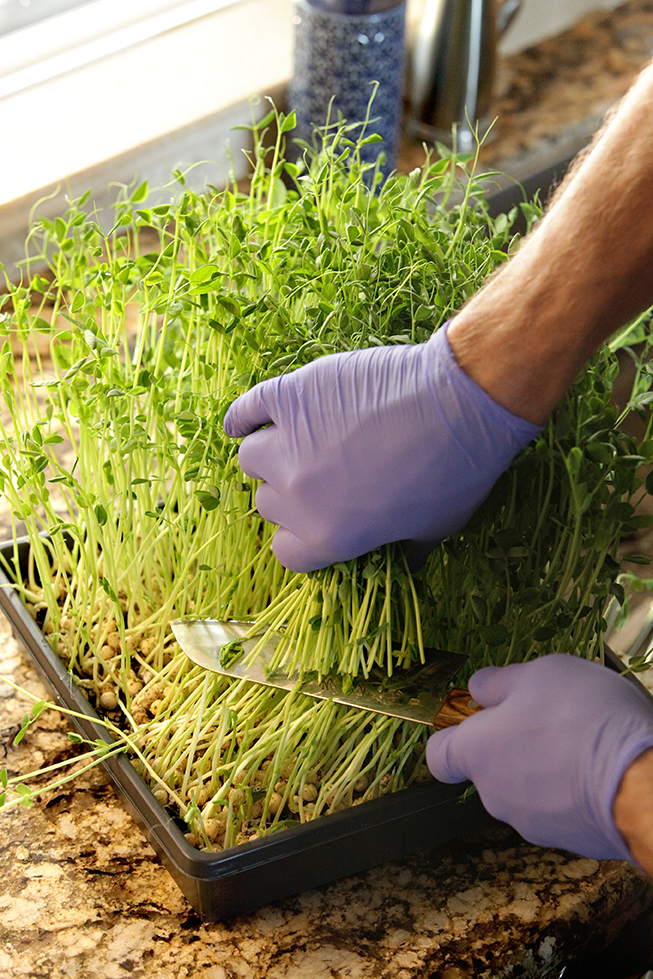 Their personal favorite microgreen salads usually consist of a base of pea and sunflower microgreens, sprinkled with broccoli and kale microgreens with a bit of herb micros mixed in.

As Brian and Shannon began producing more microgreens than they could eat, they realized two things: they loved growing food and they should probably start selling their extra produce.

Brian loves to learn and has benefited from taking business and farming classes. This year, while taking Kitchen Table Consultants Rebecca Frimmer’s San Diego Farming for Profit class, he hit it off with guest speaker Janis Garcia, founder of Daily Harvest Express.

Janis immediately spotted two features about High Ranch Farm’s microgreens that she loved… One: they’re sold as living microgreens so they’re in perfect shape and as fresh as possible whenever a customer is ready to eat them — even after sitting outside in a delivery box. (Most microgreens are pre-cut, which causes them to have a much shorter shelf life.) 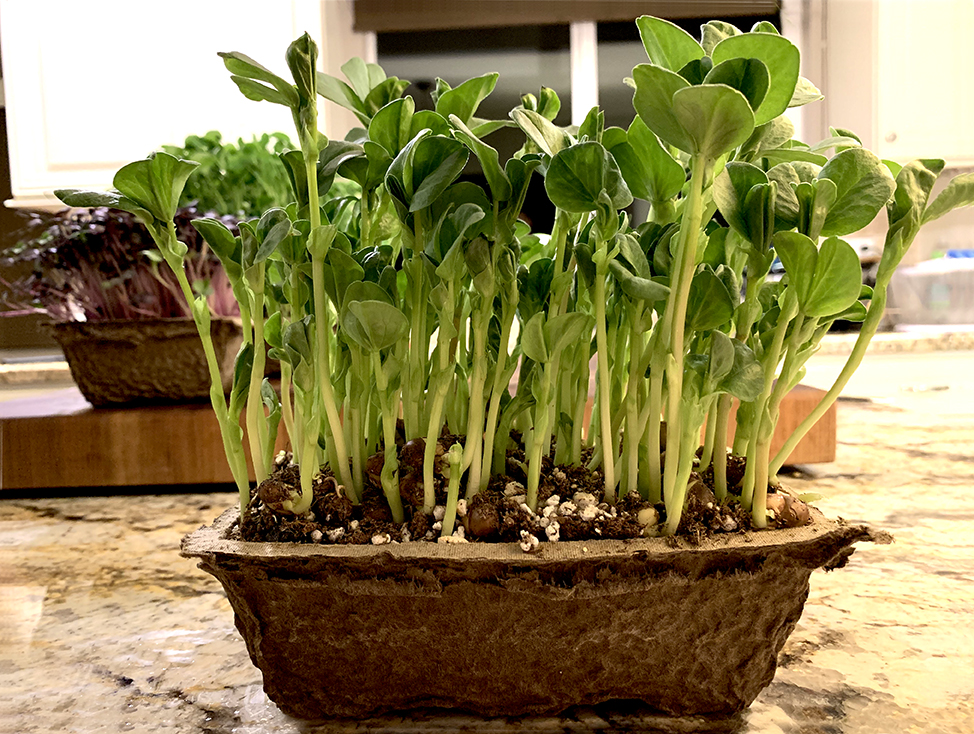 High Ranch Farm’s living microgreens keep fresh until you harvest and eat them.

Second, High Ranch Farm’s harvested microgreens are sold in decomposable corn oil based containers, not plastic. Living trays are sold in fiber grow trays. This is much better for the environment as it reduces plastics and microplastics ending up in landfills or in our oceans.

Janis adds, “I used them myself and really enjoyed them! I used them in salads, as a topping on pasta, and in smoothies… they stayed fresh on my counter for two weeks as I clipped what I needed. I just kept them on a plate with a little water.” 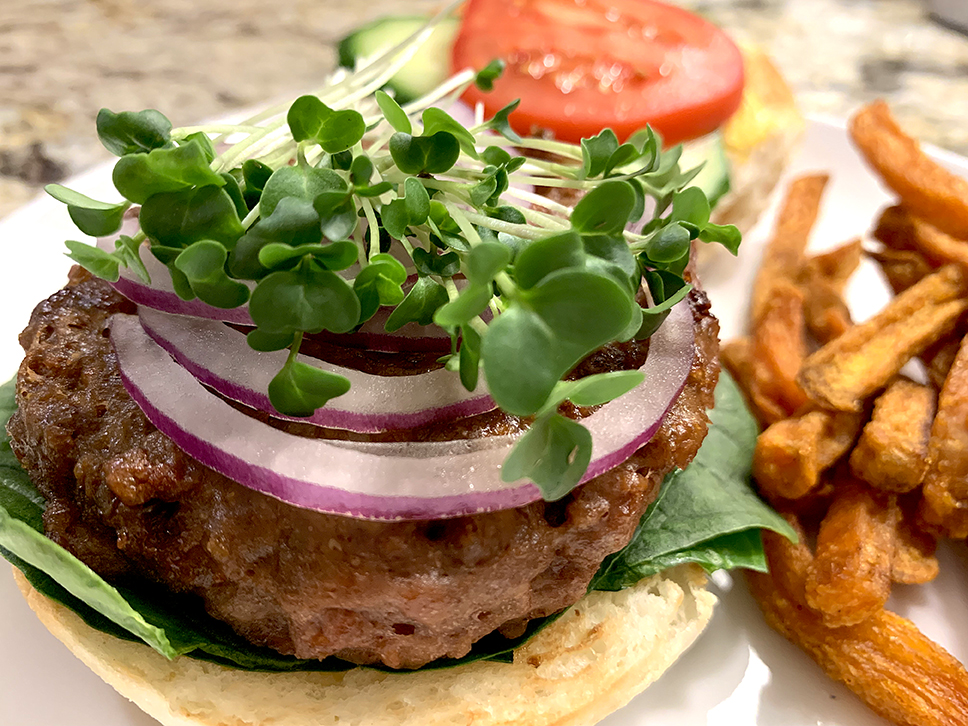 What does the future hold for High Ranch Farm?

Brian loves growing food and doing everything he can to improve the health and wellbeing of his fellow citizens — especially youngsters.

He’s currently taking a farm-to-institution workshop via San Diego Farming for Profit to try to get his microgreens into hospitals and local schools. “Children really seem to love microgreens – even if they turn their noses up at the full-grown version of the same vegetable,” he says.

Brian is also thrilled by what he perceives as more people throughout San Diego County learning about and taking charge of their own health, while also supporting local organic farmers. 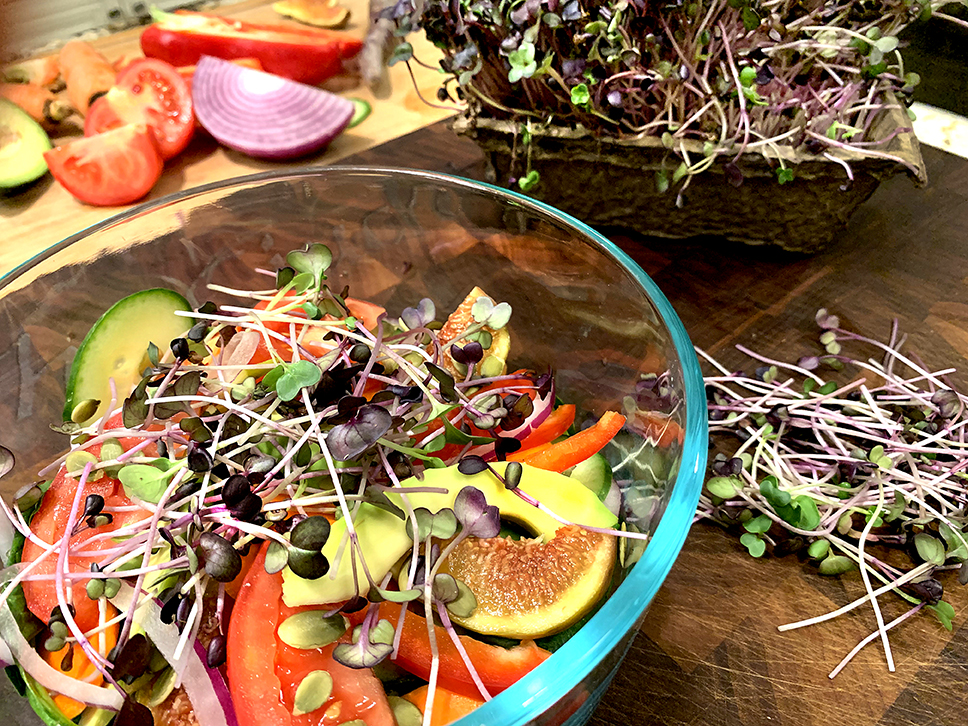 Health starts here, on your plate. We’re so thankful to be able to partner with farmers like Brian, so we can help San Diego residents eat better. Make fresh, locally grown microgreens part of your regular diet!

Is San Diego about to lose a hard-working, experienced fireman to the farming sector? Nope.

Brian loves being a fireman, and he’s not sure how large he wants to grow his side business. But he does know he doesn’t want to take on too much debt or grow faster than he and his family can confidently manage.

“If I can do this — something that I love — when I retire as a fireman, that would be great,” Brian says.