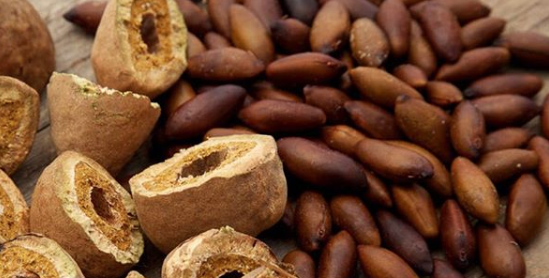 Barùkas nuts: a newly discovered superfood that could save the world.

If you’ve read our Farmer & Artisan highlight articles over the past year, you know that the Daily Harvest Express team gets to work with some truly extraordinary and awe-inspiring people. We’re so thankful for what the farmers and artisans in our network are doing to produce the healthiest, most flavorful foods on the planet, right here in the San Diego area. 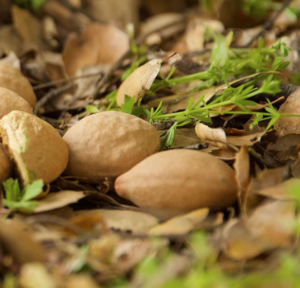 We initially met most of the farmers and artisans in our network at farmers markets or due to word of mouth. However, we were recently elated to discover a company called Barùkas right under our noses — quite literally. In fact, their facilities are practically next door to our office, and there are some mighty good smells (and tastes) to be had there.

We’re fairly in-the-know when it comes to delicious, healthy foods and “superfoods” (superfoods are certain foods with unusually high medicinal or health benefits). However, until we met our business neighbors, we had no idea what a barùkas nut was. Boy were we blown away by what we learned.

As it turns out, barùkas nuts aren’t just a delicious superfood, they also have the potential to save one of the most ecologically important and biodiverse regions on earth while providing high paying jobs for the local farmers in the region where they’re grown.

Thus, this article is the incredible story of barùkas nuts and the crazy “health nuts” who are bringing this new superfood to the United States — including to Daily Harvest Express customers.

Darin Olien is a renown health and wellness expert who has spent 20+ years searching for the most powerful superfoods the planet has to offer. When he discovers such a treasure, he works thoughtfully and carefully with the indigenous people in the area where the superfood is grown or foraged to ensure that both people and place are respected and preserved. 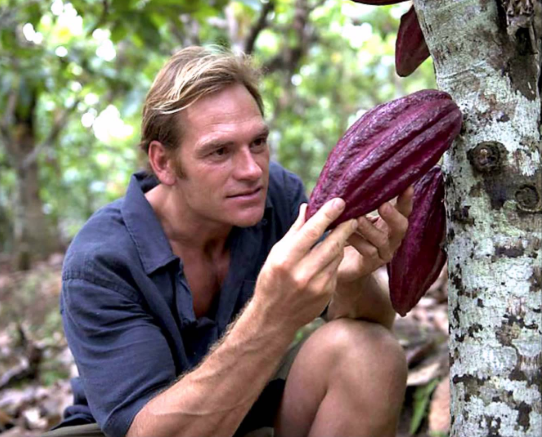 That means farmers are given a fair wage for their work and that local ecosystems are managed regeneratively or sustainably in the process. This philosophy directly aligns with the concept of responsible capitalism, which we also stand for.

In 2016, Darin decided to travel to remote areas of Brazil to hunt for superfoods previously unknown to outsiders. Darin’s friend, Rodrigo Figueiredo (who is now the CEO or Barùkas Inc.), grew up in Brazil. Upon hearing about the trip, Rodrigo advised Darin to search for a nut that grew in the Brazilian Cerrado. Locals referred to it as “barùkas.”

The Brazilian Cerrado: A Region As Important to Earth as the Amazon Rainforest

Nearly everyone has heard of the Amazon rainforest, which ecologists often refer to as the “lungs of the earth” due to the rainforest’s function of inhaling and exhaling massive amounts of carbon dioxide and oxygen, respectively.

The Cerrado ecoregion of Brazil.

Well, just south of the Amazon rainforest lies the Cerrado, a 500 million acre region (that’s 3x bigger than Texas for reference) of Brazil that is regarded as the most biologically rich savanna in the world. The region features roughly 10,000 plant species, 1,000 bird species, and 400 mammal species not found anywhere else in the world. The Cerrado is also home to the Guarani Aquifer, the largest underground freshwater aquifer in South America, which accounts for a third of all the water in the Amazon River (yes, that’s a lot of water).

Not only does the Cerrado impact the climate throughout South America, it also impacts global climate systems as well.

The name “Cerrado” comes from the Spanish word “closed,” owing to the fact that the region was remote and relatively undeveloped — at least until recently. Since the 1990s, deforestation has increasingly ravaged the region, as native forests and grasslands are cleared and replaced by fields of soybeans, corn, and cattle farms.

Huge amounts of water, synthetic fertilizers, and pesticides are used to produce these crops, which then contaminate the region’s dwindling rivers while also contaminating the underground Guarani Aquifer, creating poisonous ripple effects throughout the region.

Baruzeiro: a tree that needs no water, makes its own fertilizer, and produces a superfood for people.

One of the most ecologically important native trees that has long called the Cerrado home is the baruzeiro, which produces a delicious fruit. Inside the fruit is a second gift, barùkas nuts. 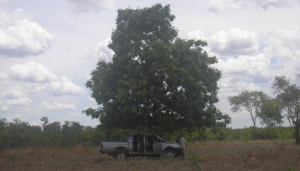 A baruzeiro or “baru” tree.

Baruzeiro trees are in the legume/bean family, and are uniquely adapted to grow in the harsh conditions of the Cerrado, where a brief, intense rainy season is followed by nearly eight months of hot, dry weather. 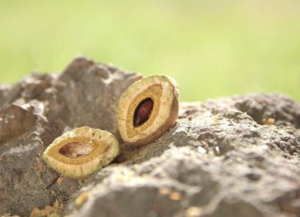 The baruzeiro tree’s massive, deep taproots mean that the trees require no irrigation, since they source all the water they need from deep beneath the soil surface. Perhaps most fascinating of all is the fact that the trees are “nitrogen-fixers,” one of the rare species of plants on the earth that actually produce their own fertilizer via the biological process of “nitrogen fixation.” Through a symbiosis with certain types of bacteria in the soil, they’re able to convert atmospheric N2 into a plant-available form of nitrogen in the soil. In short, the baruzeiro tree makes its own fertilizer.

Despite these incredible features and benefits, millions of baruzeiro trees have been cut down to make room for corn and soy, grown via water- and chemical-intensive monoculture. This is an ecological tragedy that few have heard about, but one that impacts us all, nonetheless.

Barùkas: A Startup Company With A 20 Million Tree Mission.

Enter Darin Olien. On a tip from his friend Rodrigo Figueiredo, he ventured to the Cerrado in search of barùkas nuts. Upon tasting them for the first time, he had no idea about the ecological importance of the trees they came from or the destruction currently taking place in the region.

He only knew two thing: first, barùkas nuts tasted amazing (like a combination of peanuts and almonds); second, nobody outside of the Cerrado had even heard of barùkas nuts, much less eaten them. 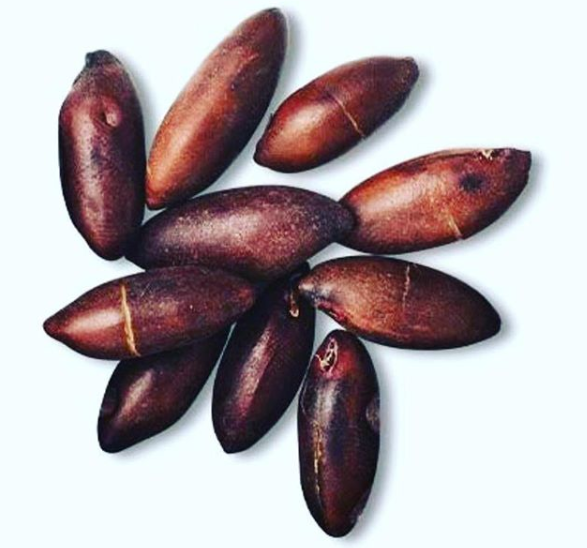 But were barùkas nuts exceptionally nutritious, a true superfood? Darin had the nuts tested in a lab and was blown away. By weight, barùkas nuts offered:

That’s when Darin realized he’d stumbled upon a true superfood. Once he found out the story of the baruzeiro trees and the Cerrado region in general, he knew what he had to do…

Soon, Barùkas (the company) was formed and a team of passionate health nuts (pun intended) came aboard. Their goal was to bring this incredible superfood to people around the world to help people become become healthier AND to save an ecologically critical region and its farmers from extinction.

The company works exclusively with local farmers to source the barùkas fruit and nuts, paying them a wage that exceeds what they’d make by producing corn and soybeans. 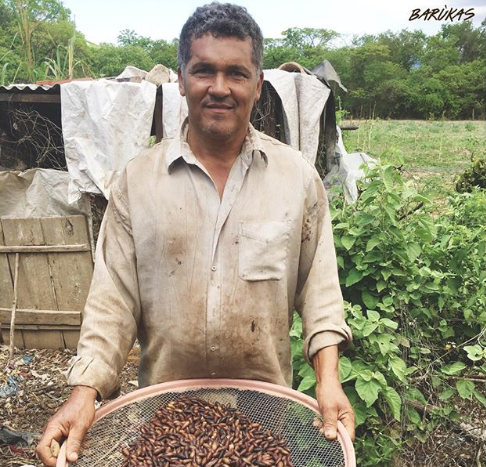 Justin Tanner, Barukas’ COO (who “eats at least a handful of barùkas nuts each day”), notes another important benefit: the baruzeiro trees actually help the region’s cattle ranchers by providing much-needed shade for their cows. Yes, the cattle can also eat the fruit and nuts, which are as healthy for them as they are for humans.

The company embarked on a mission to plant a whopping 20,000,000 baruzeiro trees throughout the Cerrados, helping to reforest the region while providing good jobs and a new industry for a region where stable, high paying employment is scarce. Each bag of of barùkas nuts sold helps them plant a new baruzeiro tree in the Cerrado. That means the region and the planet get cleaner air, cleaner water, more biodiversity, and good jobs for local farmers.

What do the rest of us have to do to make this mission possible? Eat barùkas nuts, a delicious, wholesome superfood — and spread the word about the company!


Daily Harvest Express is proud to welcome Barùkas into our network of farmers and artisans. They’re an exceptional group of people who are truly making the world better, one delicious, crunchy bite at a time.

If you’re already getting a Farm Box and want to add Barùkas to your delivery, you can order them separately and then use the coupon code ‘Addon’ during check-out to remove the delivery fee. Check out the What’s In My Box page to see what’s headed your way or to customize your order.

If you’re a new customer, learn more about which service is best for you and get your Daily Harvest Express Farm Box order placed no later than Sunday evening at 5 pm PST, so you can enjoy fresh, healthy food from local farmers. 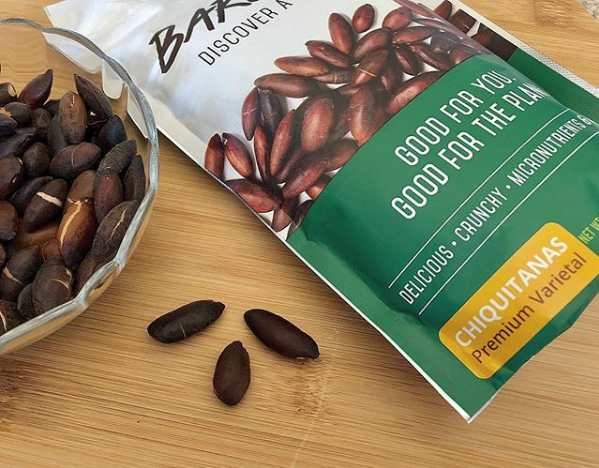 Who knew that saving the world could be this delicious?

Subscribe to our weekly newsletter to get more local food & farming news from Daily Harvest Express.