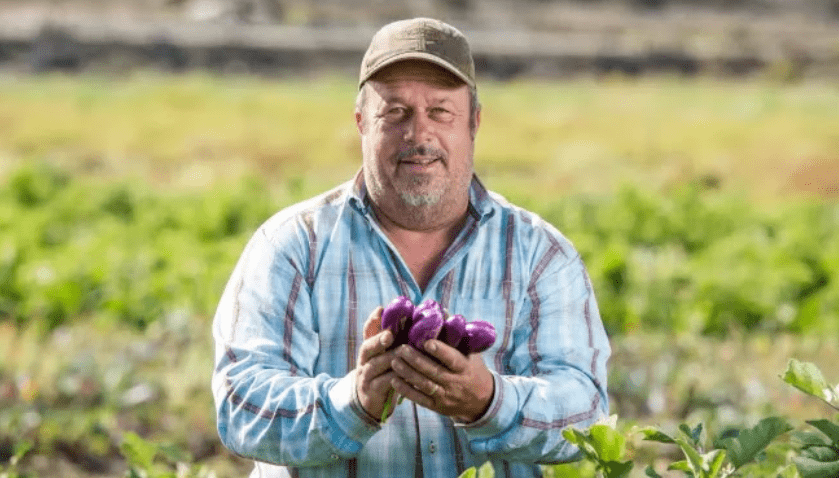 Phil Noble had what most Americans dream of: a comfortable (almost) six figure job running a property damage unit for a large insurance company, a house in San Diego, and a beautiful family. However, he didn’t quite feel like his roots were planted where they were supposed to be.

As he puts it, “I was getting country fever.”

Not to mention, his 16 year old son, Justin was about to turn pro in Motocross, which meant a more rural residence would make practice easier. What to do? Noble kept his job, but he and his family bought land and moved out to the country to an area at the base of a mountain that the locals called “Sage,” near Hemet and Aguanga, CA.

Having grown up in the country, Noble soon returned to activities from his youth. Growing up, he had worked in the family garden almost daily. When he’d needed money, he would simply load up his wagon with veggies he’d grown and cart them to the nearest neighbors to sell. 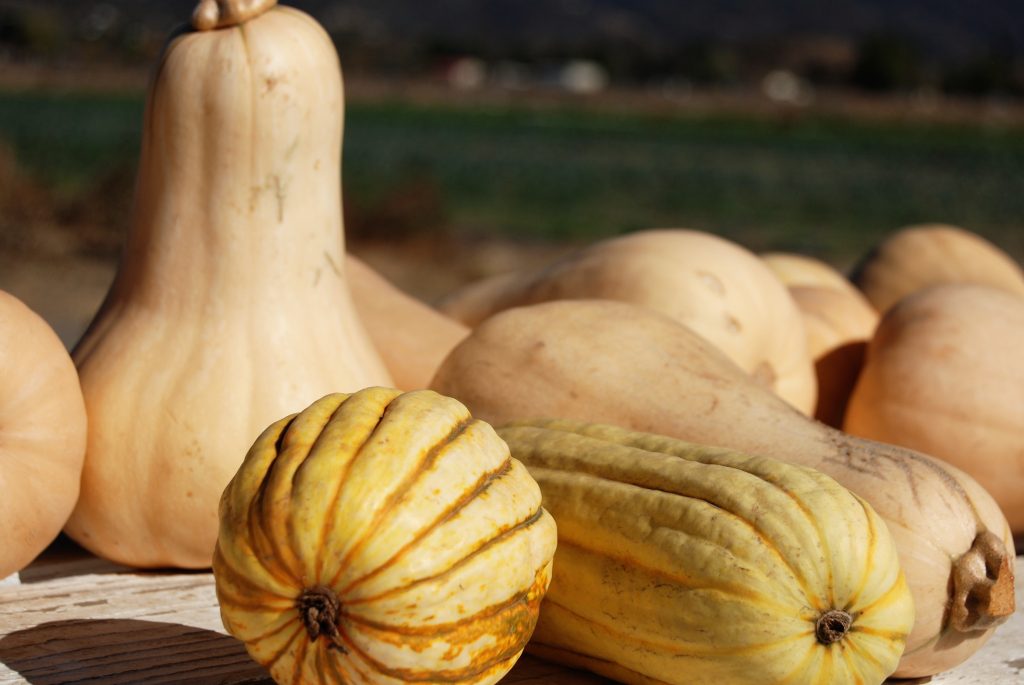 This beautiful winter squash grown on Phil Noble’s farm might not be too different from what he sold to his neighbors as a child.

Naturally then, as an adult, one of the first things he did when moving back to the country was start a large garden to grow fresh produce for his family. The garden soon grew beyond what his family could eat, so they began taking it to local farmers markets on the weekend. His produce became a big hit and people at the markets asked him to keep coming back so they could buy more. To help keep up with demand, the Nobles bought more land around their homestead and put it into agricultural production.

Soon, a conflict occurred: he was essentially working two full-time jobs, one as a farmer and one in the insurance industry. He was going to have to choose one or the other. “I can always go back to work, but I won’t always have an opportunity to farm,” he told himself. So, in 2010, Noble decided to leave his job in the insurance industry and become a full-time farmer. Thus, Sage Mountain Farm was born.

Today, Sage Mountain Farm is a highly diversified USDA certified organic operation that produces fruits, veggies, and herbs on 20 acres. They also have cattle, pigs, chicken, and sheep. In addition to being part of Daily Harvest Express’s program and offering their own CSA, they sell the majority of their produce to area restaurants, schools, hospitals, hotels, and farmers markets. 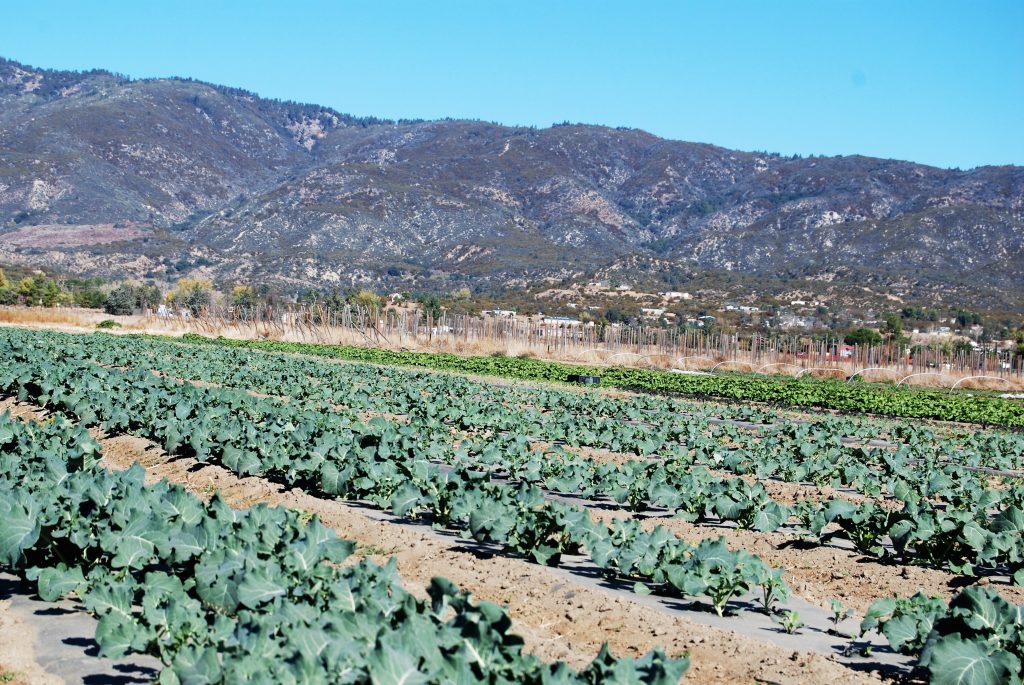 A Riches to Rags Story

If you’re expecting a fairytale ending, we’ve got bad news for you: Noble’s story is far more complicated. “I gross $400,000 a year through the farm, and I’m basically broke,” he laments.

Noble is not alone. His story of financial hardship as a small farmer is echoed by hundreds of thousands of farmers across the US. The contributing factors to these struggles are manifold and complex.

Could he put more than 20 of his 80 acres into production? “I have a labor shortage–any labor that’s still available is on marijuana farms now. We get about $1/lb for our produce and the marijuana farmers get $600-3,000/pound. So I can’t compete with the wages they can pay, and I don’t want to endanger my family. Not to mention, my brother and sister died from drug and alcohol addictions, and I just can’t justify getting into that business.” 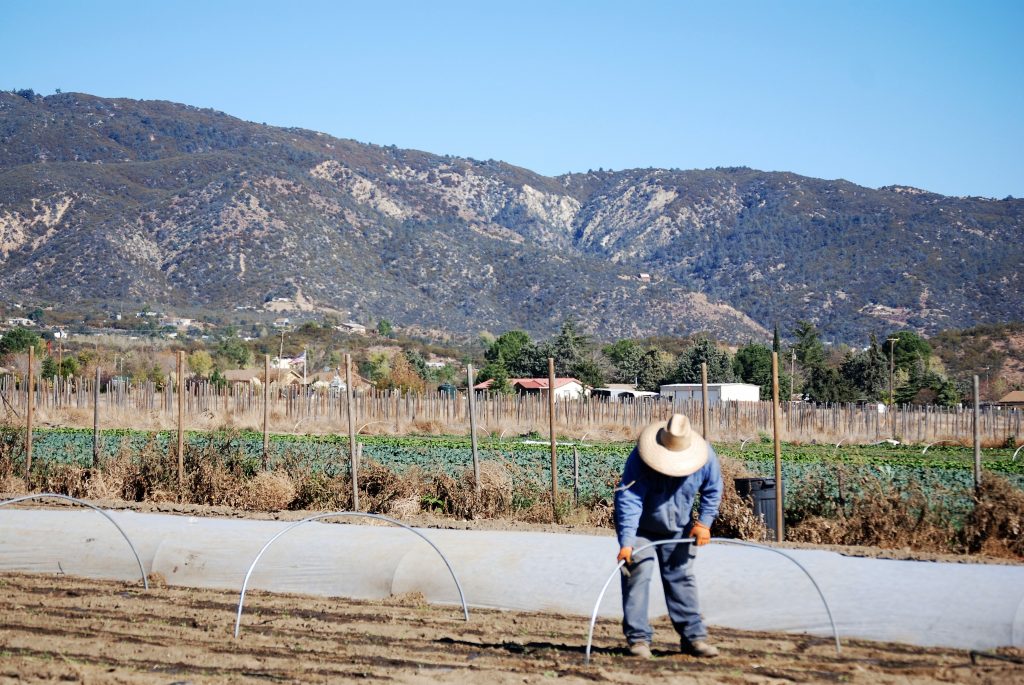 Sage Mountain Farm’s profitability isn’t just getting squeezed by labor shortages and other expenses such as workers comp, payroll taxes, and insurance. Massive “agribusinesses” are also driving the prices of produce ever downward. As an example, $45 per container is the lowest price at which he can afford to sell the romaine lettuce grown on his farm. Meanwhile, another truck pulls up to the loading dock next to his at the grocery store and is able to offer organic romaine lettuce at $25 per container.

“I’m supposed to be a sustainable, dynamic farm that treats my workers fairly. And that’s what I am, but it costs me more to do that. My workers aren’t just doing one thing; they have more functions, since we’re growing a wider variety of crops and animals. Because of that dynamic we are not able to meet the economy of scale that agribusiness has.” 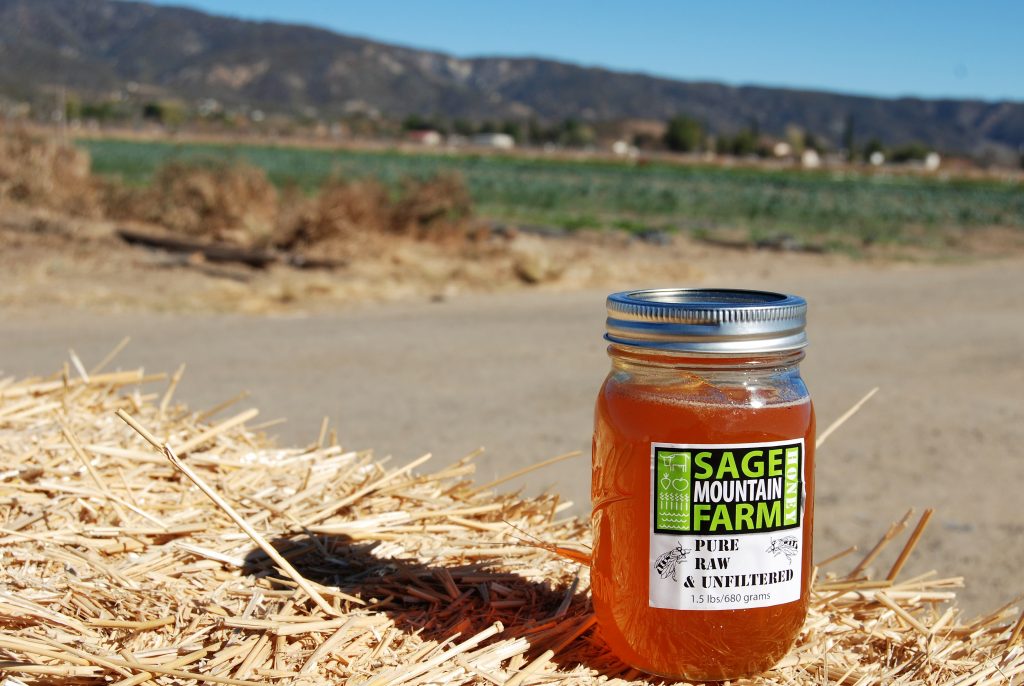 Honey: one of many diversified agricultural products produced at Sage Mountain Farm.

The farms Noble has to compete with for these types of crops are highly specialized, mechanized, and automated, with 100 foot wide tractors capable of harvesting thousands of pounds of lettuce in a matter of mere minutes.

What about growing crops that the big agribusinesses haven’t figured out how to fully mechanize and automate (yet)? Noble mentions zucchini. “They can’t mechanically harvest zucchini, so I can compete on price there. So do I turn into a zucchini farm or do I stay dynamic and biodiverse?”

As much as Americans who are paying attention to these issues rightfully complain about the manifold harms caused by “monoculture” farming and the decimation of small farm economies caused by large agribusinesses, it seems that few are willing or able to pay a bit more for their food in order to support operations like Sage Mountain Farm.

Noble thinks of this as a cultural challenge, where educated consumers can help pave the way for smaller, more diversified farms that can create a higher standard of living for farmers, their families, and their workers alike–while providing a much higher quality product in return. 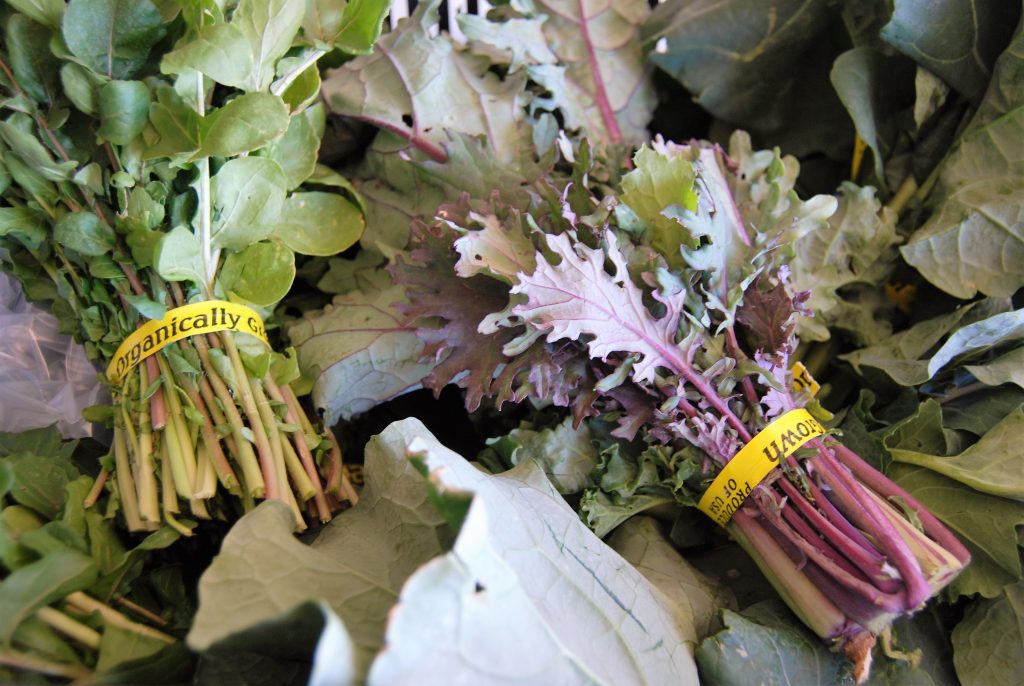 “Why do people pay more for craft beer versus ‘big’ beer? Look at towns and cities where farm loyalty is high. They do everything they can to support the small farmer.” He thinks San Diego is 5 years behind areas like San Francisco and Portland that place a big emphasis on local, organic produce grown on small, diverse family farms, and Riverside County is 3-5 years behind San Diego.

“I always ask people who their farmer is,” Noble adds. If people can answer with the names of the farms they source their food from, that’s indicative of a local culture that’s on the right track towards local, sustainable agriculture.

Noble also thinks if more urbanites with financial means understood the economic, environmental, and human health benefits that local organic farms serve, they might be more likely to support their local farmers. 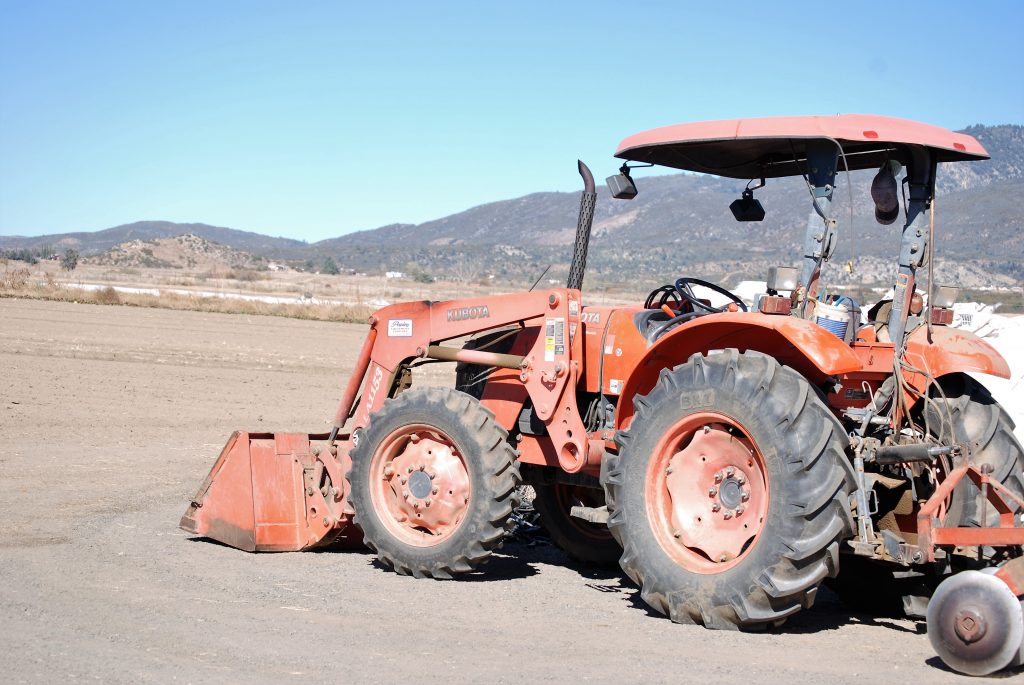 These issues weigh heavily on Noble’s mind right now since he and his wife, Juanita, just had twins in January. Like any good parent, he wants his children to have the best possible education and not have financial challenges limit their potential. “When you work really hard day in and day out, and you can’t get ahead–that’s humbling.”

Noble is considering the possibility of scaling back his farming operation to a level that would allow him to go back to work full-time in the insurance industry. “We’re first generation farmers so we’re going to struggle, we expected to struggle. The financial pain weighs heavy, the other pain isn’t a big deal. And let me be clear: we absolutely love farming. A day of hard work is great,” he says, laughing.

During a recent conversation, an attorney asked him what he wanted to do, what was most important to him in life. After thinking for a moment, he said: “I want to raise my kids on a farm.”

“I get to take my son to school every morning. I get to spend more time with him during the day. He can help me plant, harvest, and feed chickens. My son gets to spend more time with me and learn about hard work and where food comes from. He gets to connect with some of the most beautiful people on the planet, on our farm and through the people we meet at the local farmers market. He sees the relationships between the soil, the farmer, and the people who buy our food. When you’re growing food for someone, that’s personal. Your WalMart shopper is not that–it’s simply a means to an end. Hopefully, by the time he’s an adult, America will be more like Europe in regards to our food culture. People who come to farmer’s markets, who support local CSAs and companies like Daily Harvest Express who do third party CSAs right, they come as close to that European model as you get here, I think.” 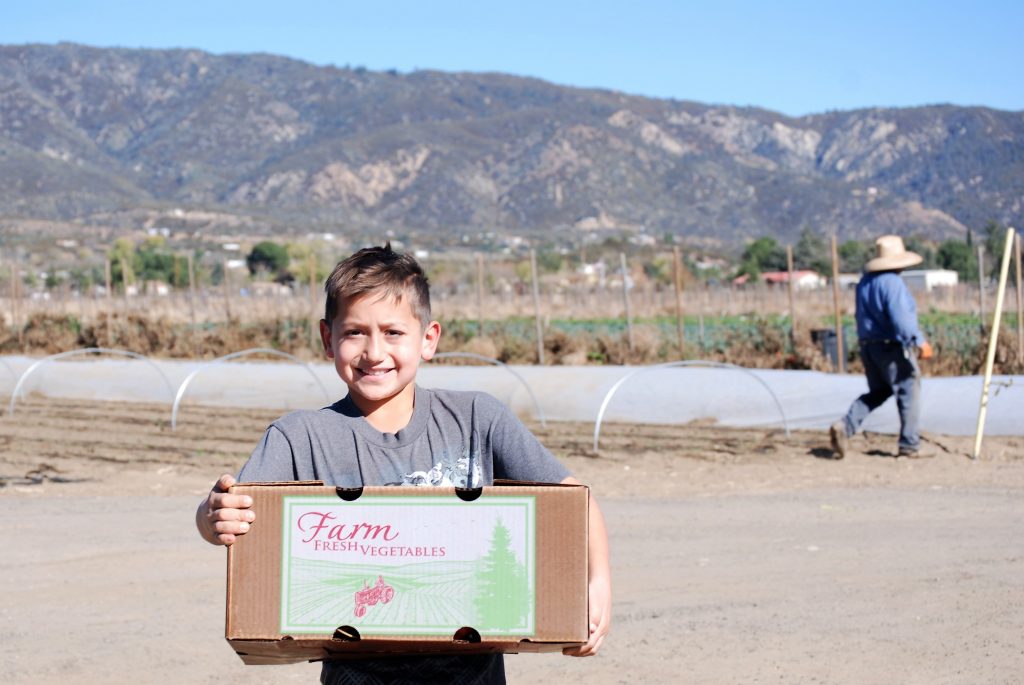 The people Phil Noble grows food for have faces and names. They’re friends; they’re children and mothers and families. With more relationship like this between farmer and consumer, everyone will benefit.

During our hour long phone call, Noble was interrupted multiple times by workers who had questions that only he could answer. He’d politely ask me to hold while he responded to each inquiry in fluent Spanish.

Towards the end of the call after another question from a worker, Noble told me “I have to get back to work.” Perhaps, more than anything, that sums up the attitude of small, sustainable American farmers. Their job is to get back to work, doing what they do best.

Who Is Your Farmer?

It’s not the rural farmer’s job to build a broader urban culture that values healthy, high quality local food–the kind of food that is the lifeblood of rural economies and ultimately keeps people in our urban centers healthy and productive as well. That job falls to the rest of us.

We all have a responsibility to vote daily with our dollars, not just every couple of years with our ballots. It’s incumbent on us to care about where our food comes from while making the connection between what’s on our plate, the financial wellbeing of the people who put it there, and the ecological impacts the production of that food has on the environment we all share. Ultimately, we’re all part of the same food system, and we can’t afford to avoid or ignore its impacts.

You can start by knowing the names of the local people and farms that produce your food, and get in the habit of asking your friends and coworkers, “who is your farmer?” This practice can have a profound impact on the cultural software and economic hardware that makes it possible for the Phil Nobles and Sage Mountain Farms of the world to remain vibrant.

Will you help us grow that world? We hope so!