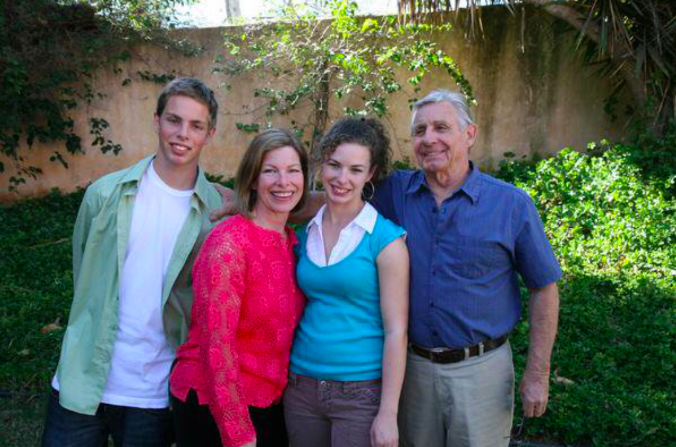 When life gives you 40,000 pounds of lemons… The story of San Gabriel Ranch

With Father’s Day upon us, we wanted to share the story of Per and Nick Stridsberg of San Gabriel Ranch. They’re a father and son team — and another fantastic certified organic farming operation in the Daily Harvest Express family.

Nobody ever became a farmer to get rich quick. In fact, for increasing numbers of farmers in the US, their occupation can often seem more like a “get poor slowly” scheme.

For second generation farmer Nick Stridsberg at San Gabriel Ranch, farming is a life-long love that is as much a part of his identity as roots are to a tree. His biggest challenge isn’t loving the hard work inherent in being a farmer or being a responsible steward of the land. Rather it’s trying to make prudent business decisions in an increasingly challenging and rapidly changing economic environment.

The origins of San Gabriel Ranch

Per Stridsberg immigrated to the U.S. from Sweden when he was in his 30s. Per didn’t come to the US to be a farmer, he came here because he wanted to be an American.

For decades, Per owned a successful car dealership. As he advanced in his career (and in age), he wanted something more, something he could work on to connect him to the earth. He also wanted a great place to raise a family and something to look forward to when he retired.

Thus, in 1987, Per purchased land and became a “hobby” farmer. San Gabriel Ranch was born. The farm was named after the road it was located on, San Gabriel Way in Valley Center, CA.

Nick and his older sister grew up in the family home on the ranch, an environment that was like a children’s wonderland. Imagine being a kid with a 100 acre backyard orchard to play in filled with 10 different varieties of fruit! If Nick or his friends needed a snack while out playing, swimming in the farm’s irrigation ponds, or riding their dirt bikes, they could just pick oranges, lemons, grapefruit, pomelos, kumquats, passion fruit, guavas, or avocados. 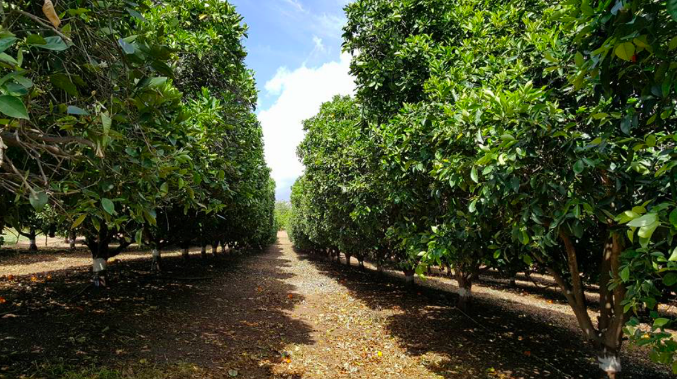 A mature row of fruit trees at San Gabriel Ranch.

When you and your family live and work on a farm, you’re not inclined to spray poison on it. This is part of the reason that Per decided to make San Gabriel Ranch a USDA certified organic farm decades ago.

Another reason? Economics. One day, he was talking to the managers at a packing house where he delivered the farm’s fruit and they were talking about a new trend called “certified organic.” Their packing house (and other area packing houses) were looking for all the organic produce they could find to meet the growing consumer demand — they were also willing to pay more for it. Per was already using organic methods, he just needed to go through the certification process to verify it so he could get labeled… So that’s exactly what he did. San Gabriel Ranch has been a certified organic operation ever since.

There were few competing certified organic orchards at the time, and prices for San Gabriel Ranch’s fruit fetched a premium. Times were good and the future looked bright.

The next generation at San Gabriel Ranch

Nick is now 27 and runs the farm. His father, Per, is now 85, but “dad is still cruising around and helping out,” Nick says laughing. Nick’s mom still does the business’s books. San Gabriel Ranch is still very much a family business, even though Nick’s sister works in another industry, she still lends a helping hand.

Nick recently got married, and he and his wife Sophie bought their own home 30 minutes away so they each would only have a short commute to their respective jobs each day. The couple met at La Jolla Farmers Market — Nick was manning the family’s fruit stand and Sophie was selling her handmade jewelry. 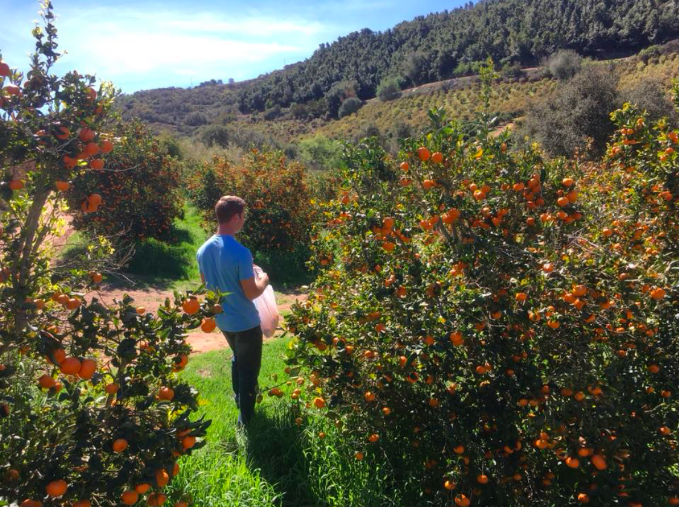 Nick taking a look at the ripe citrus at San Gabriel Ranch.

Nick and Sophie just embarked on a three week visit to see her extended family in India, during which time Per will be taking care of the farm, along with their full-time farm manager.

This placid surface view may make a reader envious of the seeming fairytale life of an organic fruit farmer. We’re all stuck at desk jobs in the city while farmers like Nick enjoy wide open spaces, abundant time outdoors with family, working with his hands, and all the other things that city dwellers crave from the confines of the notorious office cubicle.

Nevertheless, Nick is well-aware of the giant obstacles ahead if he wants to see the family farm last another generation…

Describing the current business landscape for farmers, Nick says: “The future is not too bright for farming in general in my opinion. It’s getting tougher and tougher every year. Our costs go up every year (equipment, farm supplies, labor) and prices just aren’t keeping track. Also, all the producers like us are getting squeezed from every direction. Giant retailers like Whole Foods (now owned by Amazon) and WalMart want ever-lower prices on their organic produce, which ultimately comes back to us. Also, there are more certified organic farms competing for the same market space. Farmers really have to adapt to find a ‘sweet spot,’ and nothing comes easy.”

At 100 acres, San Gabriel has far more produce than they can possibly sell at local farmers markets. (They do still sell some produce at area farmers markets.) That means they have to work with area packing houses who take bulk produce from farmers and sell it to brokers and/or giant retailers.

San Gabriel Ranch has four full-time staff and quite a few seasonal workers, but during peak season, the packing houses supply area farmers (including San Gabriel) with whole crews to come out and pick produce, filling the gap.

Since produce prices and availability around the country are now so unpredictable and subject to change, that means the packing houses often can’t offer a pricing agreement before sending out their workers and buying the fruit. Translation: this means farmers often have no idea how much they’ll get paid or if they’ll actually be able to make a profit on their produce until long after they’ve actually sold it. 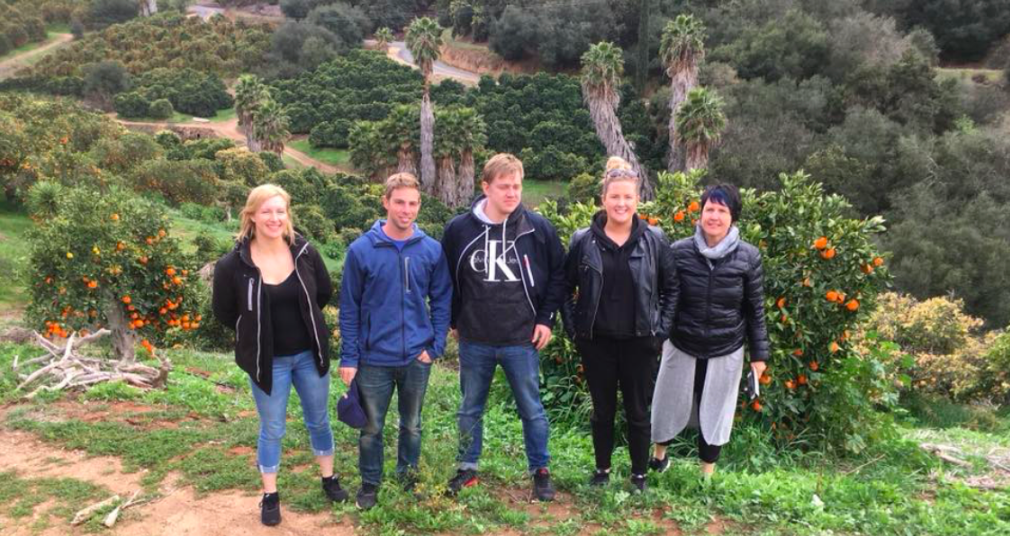 Nick with some friends at the farm.

Nick’s goal is to find the right combination of sales outlets to give his farm the profitability it needs to be economically sustainable, not just environmentally sustainable. Selling bulk produce to packing houses allows San Gabriel to offload huge quantities of seasonal produce very quickly, but it’s the least profitable option.

Selling as directly as possible to consumers is the most profitable option, but it’s more time-consuming. Not to mention, it’s nigh impossible to sell 40,000 pounds of organic lemons to farmers market patrons on a single Saturday morning!

Recently, Susan Moore, jam maker extraordinaire of Oak Moon Kitchen (available in our online store), told Nick about a company called Daily Harvest Express (us!), that operates like a mobile farmers market, bringing produce straight from local farms to people’s homes and businesses throughout San Diego. Now, San Gabriel Ranch is part of the Daily Harvest family. While we can’t buy 40,000 pounds of lemons in a week, we can certainly help family farms like Nick get a fair price for bulk produce — and still make sure area residents feel connected to their local farmers.

We all know the saying, “when life gives you lemons, make lemonade.” Well, life has given Nick 100 acres of lemons (and other fruit). Now he’s the latest generation of farmers who have to try to figure out how exactly to turn all those lemons into lemonade — profitable lemonade. The next generation of farmers (and Stridsbergs) are depending on it.

What can you do to help family farms continue for generations to come? Care about the quality of the produce you buy and the people you buy it from. Buy local. Ideally, buy organic. And thank farmers like Nick who are on the front lines. Without them, life would have no lemonade.

From all of us at Daily Harvest Express, thank you Per and Nick for bringing the highest quality organic fruit to San Diego and beyond. And Happy Father’s Day, San Diego!